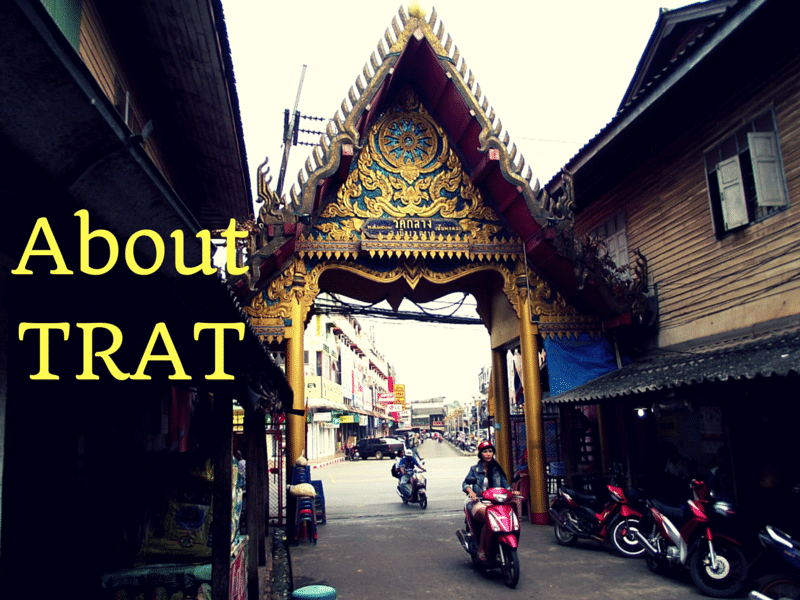 What can you see and do in Trat town?

Trat is Thailand’s eastern-most province, bordering Cambodia along the Khao Banthat mountain range. Trat town serves as a launching point for visitors to the province’s 52 large and small islands, including those of Mu Koh Chang Marine National Park, whose long, white, sandy beaches have made Koh Chang one of Thailand’s top ‘get away from it all’ island destinations.

Trat province is the easternmost in Thailand and borders Cambodia.   In the past the area was an important stop for sailors but nowadays it;s best known as the hopping off point for the islands of Koh Chang, Koh Kood and Koh Mak. Very few people choose to stay more than a night in Trat town .  However, if you aren’t in a hurry and want to sample some local life then it’s definitely worth a couple of days of your time.  There’s cheap accommodation in modern hotels and also a range of budget guesthouses in the old quarter by the riverside.   The town is also well known for it’s bustling night market which is a foodies paradise.

Trat town is around 315Km from Bangkok and can easily be reached by public buses from Ekkamai and Morchit bus stations and also by plane.  Bangkok Airways fly 3 times a day to their private airport 30Km from Trat town.

The climate in and around Trat is one of the wettest in the country.  From May to October the rainy season can deposit as much as 1,000mm per month on the mainland and islands.  The upside is that this is a very fertile, green area of the country.  You wont see any of the parched landscapes that can be found in the north.  It is one of the main fruit growing areas of the country with the main fruit harvesting season being March to August.

Trat has a rich history and it’s population has long been a mix of Thai, Lao, Chinese, Khmer and Vietnamese.  In 1904, Trat was briefly annexed by the French army who were then in control of a lot of Indochina.  However, it was soon handed back in 1907 in return for border land and what is know the town of Siem Reap.  When you visit Trat you will see the old Siamese flag, depicting a single white elephant on red background flying all around the town.  This is to celebrate the province’s independence.

For those looking to kick back and save some cash, Trat town is one of the cheapest destinations in Thailand.  It’s still not too difficult to find a private fan room and three cheap meals for a couple of hundred Baht.  And if you need a little more luxury, the town’s best guesthouse – the Rimklong Boutique Hotel – is around 1,000 Baht / night.  Other new hotels in the town centre include Trat City Hotel, Toscana Resort and Chivapuri Residence.  All are around 1,000 – 1,200 Baht/night for a modern hotel room.

Trat town centre is a centred around the indoor market.  From here you can take a songthaew to the ferry piers for Koh Chang or a kilometre out of town to the bus station, from where it’s easy to head to Bangkok or the Cambodian border at Hat Lek.

The streets in the town centre are lined with ‘Mom & Pop’ stores selling everything imaginable.  The architecture tends to be drab, grey shophouses but there are some hidden gems as you approach the riverside area.  It’s here that you will find a much more charming area with old wooden homes lining the narrow streets, some of which have been converted into budget guesthouses, coffee-shops and small restaurants.

The history of Trat can be traced back to the reign of King Prasat Thong of the Kingdom of Ayutthaya. Formerly known as Muang Thung Yai, Trat has played an important role in the development of country’s stability and economy due to its strategic location. The town of Trat has later become a community of Chinese Merchants.

Trat served as a checkpoint and buffer city in 1767 and was responsible for providing provisions to King Taksin the Great before he moved his navy from Chanthaburi to Ayutthaya, where he expelled the Burmese and liberated the Kingdom from Burmese rule.

In the Ratanakosin period, during the reign of King Rama V, Trat played an important role again in stabilizing the country’s sovereignty. King Rama V made an agreement with the French government (who had also taken Chanthaburi under its supervision) to get Trat back. In doing this, Phra Tabong, Siamrat and Sri Sophon were traded off.

How To Get to Trat

By Car
From Bangkok, take Highway No. 34 (Bang Na-Trat) or Motorway to Chonburi, then use Highway No. 344 (Ban Bung-Klaeng) Arriving at Klaeng, turn onto Highway No. 3 and proceed to Trat. The total distance from Bangkok to Trat is 315 kilometers.

From Chanthaburi to Trat, the regular bus takes about an hour.

Getting to Koh Chang from Trat